Alex Cora Throws Everything But The Kitchen Sink At The Dodgers- Max Muncy Throws It Right Back At Him.

More than any other sport, baseball involves a lot of luck.  Someone can hit a weak ground ball that gets past the infield, and he will be praised for “not trying to do too much.”  On the flip side, someone can hit a scorching line drive right to the second baseman, with a runner on second that immediately gets doubled off the base.  Fans will then complain about a lack of “hitting in the clutch”.

That kind of mentality is even more extreme when it comes to managers.  Alex Cora is a perfect example of this.  A first year manager who’s “pushed all the right buttons,” he gets the kind of leeway rarely seen in baseball, let alone with rookies.  And to be fair, the record is on his side- a 108 win season and a trip to the World Series will do that for a guy. 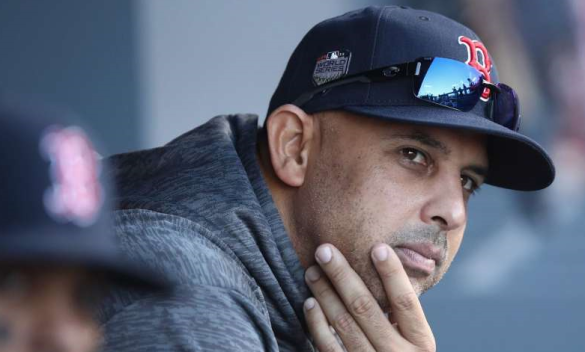 Still, contrary to what you’d believe from the media, both old and new, he’s far from infallible, and he proved that in Game 3 of the 2018 World Series.  While not the main reason the Red Sox lost, he didn’t help matters, and unnecessarily put them in an even worse position going forward.  He managed as if he were down two games, instead of up two.  In fact, if I didn’t know better, I would’ve thought yesterday was an elimination game!  He practically emptied his bench barely after extra innings began, had THREE starting pitchers in the game- poor “losing” pitcher Nathan Eovaldi, the previously assumed Game 4 starter, threw more innings in Game 3 than the ACTUAL starting pitcher, Rick Porcello- and reduced rising star left fielder Andrew Benintendi to a meaningless pinch hit at bat.  He also decided to pitch to Yasiel Puig instead of dependable but light hitting Austin Barners.  (In fairness, Puig got considerable help from Ian Kinsler, 2018’s version of Bill Buckner.)   Alex Cora will be AL Manager of The Year, but he didn’t look like it last night.

But enough about the Red Sox manager already.  The Dodgers, playing comeback kids all year- really almost all decade- toyed with their fans’ collective hearts once again, coming to life at the precise moment when everyone gave up on them- particularly Max Muncy.  Barely on the Dodgers’ radar at the beginning of the year- STILL barely on their radar in terms of payroll- Muncy would end the game with the most famous Dodger home run since Kirk Gibson.  But even more incredibly, Muncy showed highly alert baserunning- something sorely lacking in the Dodgers’ era of analytics- by ending up in scoring position, getting to second base on a foul popup catch by Eduardo Núñez, who subsequently ended up in the stands.  (On a sidenote, Núñez is taking WAY too much heat, IMO. Had Muncy not alertly tagged up, fans would say what a great catch it was. CLEARLY he was playing on a bad ankle, and seemed to be going with his momentum, rather than make a halting stop.)  With postseason-saving baserunning and game-ending hitting, Max Muncy was Dave Roberts and Kirk Gibson rolled into one! 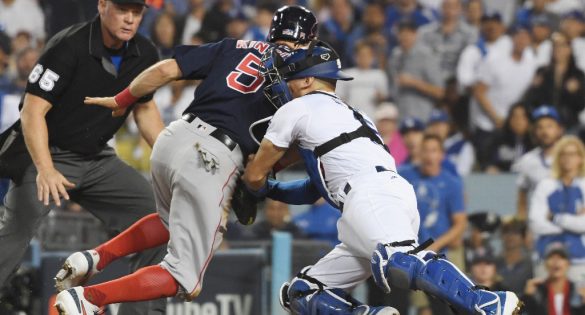 Finally, it would be criminal to recap Game 3 without mentioning Cody Bellinger’s amazing throw at the plate, gunning down- you guessed it- Ian Kinsler.  And then there was the starting pitcher Walker Buehler, the Dodger rookie who has pitched as well as he did in the regular season, and at times even better.  Going 7 innings in an era when managers give starters the hook before the game is even halfway done- well actually, in this case it ALSO wasn’t halfway done, but you know what I mean- the Dodgers would be dead in the water without his efforts.  When Clayton Kershaw has yet another attempt at redemption in Game 5, the fans don’t need to see all kinds of excuses, disguised in the form of stats,  showing how great he truly is- they need him to perform like Clayton Kershaw.  If a young rookie making the league minimum can do it on a consistent basis, then so can one of the greatest (not to mention one of the highest paid) regular season pitchers in the history of baseball.

Before getting to Game 5, though, the Dodgers have a golden opportunity to even the series tonight, against a depleted Boston team.  Although still a game behind, after almost literally playing two games last night, the series FEELS tied.  With the momentum on the Dodgers side, it just might be soon enough.